theres really not much that makes this any different from the classic shepherd's pie. that being said, ive never made or even had shepherd's goatherd's pie before so this was a good excuse to try it

the flavor text doest mention any loreful reasons or origins for the goatherds pie, its all really just "hey theres goats in skyrim and theyre pretty good"

oh you think skyrim was cool for letting you dual wield? holding an axe in a hand and your silly litte healing spell in the other?? thats for little girls bro, watch this

"pick up three separate pans, were gonna manhandle them all at once", i say as i set a hand on your shoulder. you nervously gulp. i pull my phone out and lay it on the window sill, playing 24 by lana del rey. sweat breaks on your forehead. three pans??? you feel like you cant even hold one right now. lana sings your heart rate into the sky. you pass out, before she could even ask you for your heat. you let her down. you didnt even touch a pan yet and you let her down. no wonder youre both the way you are 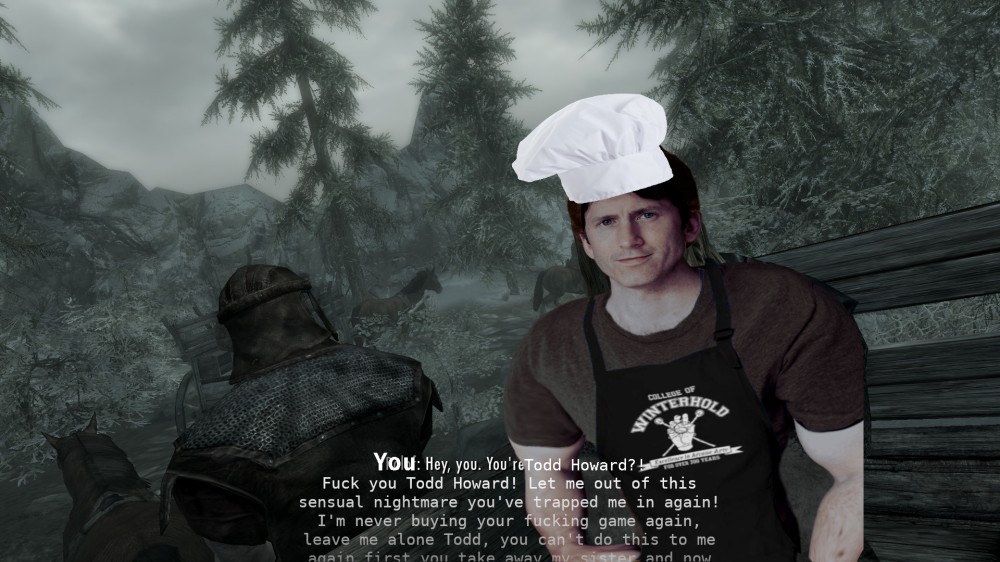 you freak the fuck out. fortunately it only takes one of Todd's masterfuly placed fingers on your lips to silence you. youve been calmed down. you stare into his eyes, and hear yourself mutter

"its time we cooked", Todd says


three beautiful cookware items. you grab the first one and fill it with water to boil. as the helpful manwife he is, Todd already washed, peeled and diced your two firm potatoes. he hands them to you, fistful by fistful, and you drop them in the boiling water, splashing and burning yourself in the process. Todd takes hold of your arm, and carefuly slathers some honey on your burn

blood flows in your cheeks and you take away your hand. afterall you need it for the second pan right? you pour a little olive oil in and Todd hands you some garlic and slices of a firm leek he chopped earlier. while they cook, you fill the third pan with water to boil and pour two cups of frozen veggies in it. they seem like too little for how much meat youve bought (and in the end it turns out they were to little), but you dont care, because Todd is here to make it better. you gaze into his eyes, he stares back...

ahm, speaking of meat. its time we took away those cooked leeks and make space for the meat. you drop the pork mince into the pan where the leeks used to be. wait, pork you said? the recipe clearly states a kilogram of lamb, goat or beef, pork isnt even a red meat! (it is actually but who cares.) Todd ponders on the situation, and decides to not fix this bug, instead, you play around it and add an ungodly amout of beef stock paste, about three or four (or maybe five) times what the recipe required in hopes you can cover it and make it feel like beef. you can almost trace a hint of a smile on Todd's stoic face. youve never felt better


everything is done. you did it, you triple wielded those pans. me and Todd could not be more proud of you. you spread the veggies on the casserole tray, then layer the meat on top, then... the potatoes? they're not done! its not enough that you boil them, you had to mash them too! everything is ruined, the sky is falling on you

seeing you distressed as you are, Todd placed a reassuring hand on your shoulder. he grabs the potato masher (idk what u call it), and starts crushing. a little bit of butter,,, some thick heavy cream,,, an egg,,, the mash is done. all thanks to Todd. thank you Todd. you hear a tear flow somewhere in the distance

you layer the mashed potatoes on top of the meat, and try making some twirly patterns on it so it looks more rustic. you turn to show your work to Todd but hes not here anymore! its like he never was... you cry, you curse, you wail

alas, you turn to the unbaked shepherd's goatherd's pie. its been about three hours and a half since you dropped to the floor in anguish. you finally decide to pick yourself up and put it in the oven (for about 30-40 minutes, or until the potatoes start browning)

its beautiful (its ok).

it tastes much better than it looks.